Kyrgyzstan, the “Switzerland of Asia”

Kyrgyzstan, where the mountains cover over 65% of the territory, has been called the Switzerland of Asia. Independence from the Soviet rule and the transition from the former command economy to a free market economy in the 1990s had severely disrupted agriculture and increased rural poverty, which today comprises three-quarters of the country’s poor. The Agricultural sector, which produces abundant cotton, tobacco, wool, and meat, remains the backbone of the economy that is slowly recovering. Poverty, however, persists.

Poverty is highly concentrated with 30% of the population living under the national poverty rate. The poor of necessity rely on natural resources to feed themselves and thrive, placing an increasing burden on the land.Decades of ecological mismanagement has left the 7% of arable land strained due to inefficient use and pollution of water resources, land degradation and improper agricultural practices. An estimated 60% of Kyrgyzstan´s land is affected by topsoil loss mainly because of man´s impact of excessive logging for fuel wood and house building, also weed plugging of remote pastures.

Poverty escalates the risk to the environment, yet with proper management it can help lift people out of poverty 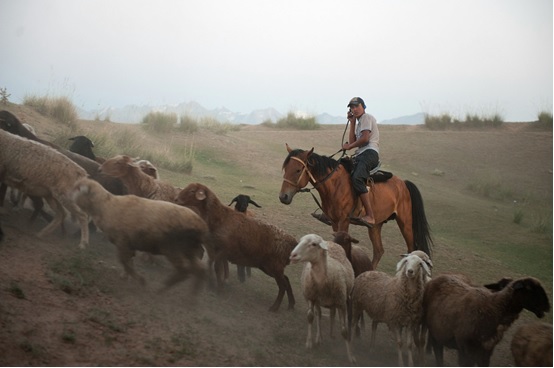 Eradicating poverty remains a challenge. While the Millennium Development Goals helped to lift more than one billion people out of extreme poverty, the Sustainable Development Goals aim to keep them out of poverty.  To reduce poverty development needs to be both socially and environmentally sustainable. The United Nations Development Programme (UNDP) is ambitious to help countries like Kyrgyzstan to build their capacity to integrate environmental considerations into development plans and strategies, including sustainable use of natural resources, and to ensure that natural wealth is used to improve people´s lives.

Increase in income depends on the continued productivity of Kyrgyzstan´s pastures; hence, reversing their deterioration. Growth relies on eco-efficiency.

The introduction of a Green economy is leading a new trajectory of sustainable development to ensure the balanced approach to its three components: economic, environment and social. The initiative of “green” is based on three main principles: highlighting natural ecosystem services, providing “green” jobs and policies to people, and achieving sustainable development through market mechanisms.

With the joint UNDP-UN Environment Poverty Environment Initiative, the Kyrgyz Republic have been steered to a path of better natural resource use, poverty reduction, promotion of environmental sustainability and addressing the intertwined challenges of the Sustainable Development Goals.

Green economy creates jobs and generates incomes for the most vulnerable and gives them an opportunity to take an active role in local economic activities.  In UNDP´s “Green village” initiative in Ugut and Ak-Muz villages of Naryn oblast practical “Do it yourself” trainings and “green” agricultural technologies were provided to local communities, enabling 1,400 residents to raise greenhouse crops and produce fresh vegetables year-round. The initiative further oversaw installation of solar water heating systems and energy-efficient LED streetlights.

In this fashion, Kyrgyzstan has demonstrated its potential to use alternative energy sources and thrive in the transition to “green” economic growth of resource-effectiveness and low-carbon development, which will complement economic, social and environmental policies.

Green economy is an important tool for achieving Kyrgyzstan’s sustainable development.  The Sustainable Development Goals represent the priorities for the economy and catalyze what markets should be delivering for people and societies. This will engender a better-managed system, where all levels of society are striving toward achieving the common goals set by the Government.