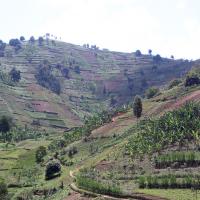 Nairobi, 30 August 2016: When environment-related public spending is compared to the much-larger economic costs of environmental damage, governments tend to sit up and take notice – and invest more in sustainability.

Depending on the country, public expenditure ranges from 15-60 per cent of Gross Domestic Product (GDP). Generally, only a few per cent of this is directed towards environmental investments, even though the costs of a damaged environment often run into double figures.

This is one of the lessons emerging from an analysis of the work of the Poverty-Environment Initiative (PEI), an initiative jointly developed by the UN Development Programme and UN Environment Programme, over the past decade. With programmes in 25 countries – nine of them in Africa – PEI has supported Member States to integrate pro-poor and environmentally sustainable objectives into national, subnational and sectoral development policies, plans and budgets to contribute to reducing poverty and creating a greener economy.

Natural resources such as forests, soils and fisheries are being degraded at an unprecedented rate; all too often the costs of this degradation are not included in economic decision-making. Re-allocating government resources offers huge opportunities in terms of human well-being, and is a critical building block for implementing the 2030 Agenda for Sustainable Development.

These figures clearly show the return on investing in sustainable natural resource use is high, yet at present that benefit is not being fully captured. (The Economics of Land Degradation Initiative highlights the value of sustainable land management. Check out its most recent publications).

However, progress is being made.

He said PEI, the UN Partnership for Action on Green Economy and SWITCH Africa Green (project supporting six countries in Africa to achieve sustainable development by engaging in transition towards an inclusive green economy), have helped Burkina Faso “to mainstream green economy and environmental sustainability into national and district plans”.

Public Environment Expenditure Reviews are useful to highlight the low budget allocations and expenditure for environment and natural resource management, and the opportunities for strengthening public financial management systems to better capture the value of natural resources and climate change adaptation investments, costs and benefits.

At the May 2015 meeting the Secretary to the Treasury in Malawi, Ronald Mangani, said of the expenditure review: “It is stimulating to note that the review may facilitate the effective monitoring of the contribution of the environment, climate change and disaster risk sectors to the achievement of the medium-term targets and the long-term vision of the country.”

In five of the PEI-supported countries, public resource allocations for pro-poor environmental sustainability have increased since the start of the programme.

Furthermore, the Rwanda National Climate and Environment Fund has helped prompt additional investments in pro-poor environmental sustainability in support of programmes and projects under Rwanda’s national development plan and budget.

“In Mozambique, the government started off in 2005 with the support of PEI Mozambique to consolidate processes in the environment sector and make clear links to poverty and development,” said Xavier Chavana, from Mozambique’s Ministry of Economy and Finance.

“Today, cross-sector coordination mechanisms for poverty and environment and other cross-cutting issues are well established and planning tools applied. The Ministry of Economy and Finance is increasingly playing a role in improving the use of environmental and climate change budget codes as a result of PEI support.”

The Ministry of Finance introduced a budget code for climate change in the national financial management system, based on a recommendation from the 2012 public environmental expenditure review.